PAFCOE batch three, as the Filipinos refer to this last graduating class, ended Tuesday night, May 28.  Thirty-seven participants, aged nineteen to seventy-six, marched down the isle of the Manila Center Church to receive their certificate and smile at the camera.  Participants had more than graduation to smile about.  Click here for more pictures. All had recently returned from OJT, which is part of their evangelism training.  On-the-job-training (OJT) had just ended with nearly 500 baptisms in thirty different sites in the Philippine Islands!

Batch three has been a memorable class in many ways.  This was our first session of PAFCOE in Manila, as the result of the invitation of Pastor Joel Sarmiento and the staff at Manila Center Adventist Church.  And what a supportive church staff they have been!  Years ago, Manila Center was built and pastored by Royce Williams, as a Center of evangelism for Manila and Quezon City.  Now, the current leadership is working hard to make Manila Center again a “Center” of evangelism for Metro Manila.  PAFCOE is helping them to realize that goal!
Also during this session, Pastor Doug Batchelor fulfilled a promise made more than ten years ago, to “return” to Manila to finish an evangelistic series which was tragically cut short by the death of his eldest son.  This year, PAFCOE students and staff alike were thrilled to have Pastor Doug and his wife Karen and son Nathan, with us in Manila for more than a week at the end of March! (See older posts for more info on this.)

It was during one of Pastor Doug’s open-air meetings in the evening, that we experienced another “memory”—an unexpected rain-shower.  For more than an hour it poured, finally forcing the cancellation of the evening program.  What a “memory” it was for about a hundred of us, huddled together under the canopy of the stage roof, trying to stay dry while listening to the local choir sing amidst the roar of the storm.

Then there was the memorable final weekend of Pastor Doug’s series, when nearly eight-thousand Adventists and their friends, gathered in a large sports complex for Sabbath worship and a mass-baptism.  This time many used their umbrellas again to avoid the falling sunbeams!

After Pastor Doug left, we began in earnest the preparation for OJT—more than thirty sites of evangelism, where our students would preach a one-month series of prophecy lectures.  The day the students left for their sites, our family flew from Manila to Bacolod City, to conduct our own OJT.

Working together with Elder Carpena, the Division Health Director, and the local Adventist Hospital (Bacolod Adventist Medical Center), we conducted a 4-week series of meetings combining a nightly health expo and health lecture, followed by a prophecy presentation.  The average attendance was around 500, with many church members bringing their friends.  The retired local conference president brought a neighbor each night, and at the conclusion of the series, saw his neighbor baptized! 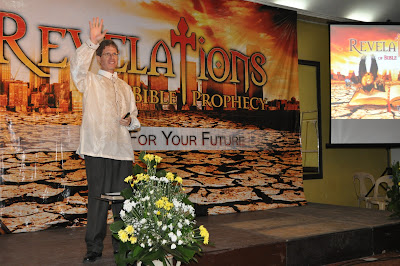 But perhaps the best memories were the ones from the Children’s Evangelistic meetings, conducted at most of the OJT sites.  For example, at the Chinese Adventist Church in Manila, attendance at the adult meets was rather disheartening, but the number of children attending the Children’s Program, grew to around 200!  The lady leading out with the Children’s Program, is a local attorney, a member at Manila Center.  She had helped out in our evangelistic meeting with Pastor Doug, and had brought her son to the nightly children’s program conducted by Sandra and the PAFCOE student assistants during the Revelations of Prophecy series.  When she heard that the Chinese Church had no one to conduct the children’s evangelistic meetings, she volunteered.

Using her law-office staff as assistants, Attorney Gizelle (pronounced G-zil) prepared the nightly crafts, and taught the nearly 200 enthusiastic street-children that attended.  Near the end of the meetings, sixty of the children decided to get baptized!  The rather inactive Chinese Church hardly knew what to do.  “Who is going to follow-up on all these children” they asked attorney Gizelle?

Of the sixty children, twenty were able to get permission from their parents to get baptized and join the Adventist Church.  Many are having a profound influence upon their parents, as they strive to live the faith they have accepted.  Attorney Gizelle and her office staff are holding weekly follow-up meetings for the children, to nurture the interests.

Among the personal memories from this past session, is a note from one of our graduates, a lay-pastor who is now returning to raise up a new church in his assigned district.  He writes,

“The very thing that I wanted to learn before coming to PAFCOE was how to improve my personal evangelism skills.  Finally, here at PAFCOE, I learned more than what I had expected—the techniques, factors, and how to witness. Another thing that I wanted to improve was my public evangelism.  Here at PAFCOE, I learned things that I never learned in college—how to preach with PowerPoint, how to use my diaphragm in speaking, practical ways to write sermons.  But PAFCOE has changed me, my diet, dress, time management, music, the ways that I approach evangelism, and most importantly, my personal devotions and personal relationship with Christ. PAFCOE showed me the right way, the right principles for a Christian in doing evangelism.”

Of the thirty-seven students that came through the PAFCOE training this “batch,” only one paid their own way!  The rest were sponsored.  On behalf of the graduates who are now “going forth” to work for the Master Soul-winner, and also on behalf of the PAFCOE staff, we extend to each of you our “thanks” for your faithful prayers and support!

Pastor Lowell & family & the PAFCOE staff
www.pafcoe.org
Posted by Teresa at 3:44 AM